NOTE: With COVID-19 still limiting theatrical opportunities as we head in 2022, things are a tad slow, but hopefully there will be more to talk about as the year evolves. Until then, stay healthy!

“Two B movie stars battle movie monsters by day… and real monsters by night. When the cameras stop rolling, the lines of reality are blurred, and the fantasy of their day job turns into a living nightmare!  Now if they could only get along with each other…”

The wild and witty I Love Lucifer podcast launched on July 14, 2021, on Authentic Podcast Network. This 10-episode Narrative Podcast delivers a whole new level of podcast production, and promises a truly dynamic audio experience. The podcast comes from seasoned filmmakers, Susie Singer Carter and Don Priess, with an incredible cast bringing the story to life, including Lorraine Devon Wilke, who chews scenery as snitty gossip columnist, Portia de Paulo (clever disguise for the—WAIT, we won’t give it away! Cue: SCREAMS!!). Lorraine’s vocals are also featured in the hilariously appropriate “Scream Queens” title track.

June, 2019: Selected to play the role of “Annie,” a woman dealing with the onset of Alzheimer’s, in a piece titled Elderhood (book & lyrics by Rachel Carlson and Charlotte Daniels; music by Charlotte Daniels), Devon Wilke was part of The Wallis Annenberg Center for the Performing Arts program, ‘Creating Musical Theater: A Collaborative Lab,’ featuring the program’s original musicals. Co-taught by Stormy Sacks (musical director) and Randy Brenner (director), legendary Broadway composer Stephen Schwartz mentored the shows, which were presented at the Lovelace Studio Theater at The Wallis Annenberg Center for the Performing Arts in Beverly Hills on June 2nd, 2019.

A LITTE HISTORY: True to the eclectic nature of her career, and after a long hiatus from acting, Devon Wilke got back on the boards in 2017 as “Helen,” a frustrated documentarian with a lifelong secret, in The Geeze and Me, a funny, irreverent, poignant new musical dealing with the “vicissitudes of aging.” Written by creative team, Nancy Locke Capers (book/director) and Hedges Capers (book/music), and premiered at The Tenth Avenue Arts Center in San Diego, CA, in March/April 2017, the show’s repertoire of 20+ original songs tapped handily into Devon Wilke’s expansive range of vocal styles (“a wondrous singer”…”warm, gritty vocals”), as well as her wealth of theatrical experience.

…which requires context and a few of the highlights:

It was youthful inspiration, sparked as a theater major at the Krannert Center for the Performing Arts at the University of Illinois, that led her from theatrical road shows and touring bands to the creative mecca of Los Angeles. Early years there were spent in pursuit of an acting career, teased by various stage productions and small roles in film and TV, but it wasn’t long before the siren song of music pulled her back in.

When the big hair, rock & roll revolution of the MTV 80s beckoned, Devon Wilke was swept up in the movement. Discovered by leading-edge musicians and producers of the era, the project, DEVON, was built around her. The New Wave/soul band, which tapped into her raucous energy and soulful singing style, dominated those wildly exuberant band years (see Music page).

It wasn’t until the early 90s — when To Cross the Rubicon, a screenplay she co-wrote with

Patricia Royce, was produced by Seattle indie group, The Lensman Company — that she re-entered the acting arena. Directed by Barry Caillier, it starred both screenwriters, as well as iconic song man, J.D. Souther, and Twilight’s Billy Burke—with David Crosby and Jeffrey Dean Morgan in cameo roles. A small but appreciated gem on the indie circuit at the time, its most enduring significance for Devon Wilke (beyond introducing her to her husband) was both launching her screenwriting career and convincing her to re-embrace the art and craft of acting.

[One of the film’s highlights was Devon Wilke’s onscreen performance of “I Surrender,” a song she co-wrote with David Resnik. This video is a montage of scenes from the film soundtracked by that performance:]

As a member of the prestigious Alliance Repertory Company of Burbank, CA, she appeared in a number of stage productions, most notably THE FINISH LINE, a well-received collage piece on the topic of euthanasia. Controversial and irreverent, Devon Wilke wrote five of the performed pieces, appearing in several, as well as wrote and recorded the show’s titular theme song. 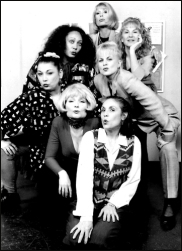 By the late 90s, Devon Wilke was cast as a cynical executive (who got all the blues songs!) in the iconic Los Angeles hit, IT IS JUST ME, OR IS IT HOT IN HERE?, an original musical presented by Theatre InSite.

Helmed by award-winning director, Michael Arabian, produced by Matt Goldsby, with book & lyrics by Barbara Schill, music by Dave MacKay, and choreographed by Kay Cole (who originated the role of “Maggie” in A Chorus Line), the show ran for eighteen months by way of CBS Radford Studios and the Odyssey Theatre, finishing its successful run at the Century City Playhouse.

Another memorable theatrical highlight was COUNTRY, THE MUSICAL. Environmental theater at its finest, the original musical won accolades for its inventive staging and music. Devon Wilke starred as an on-the-outs rocker/waitress working a country bar with a much younger singer, both vying for a chance at stardom. The music and book were both written by her husband, producer/attorney Pete Wilke, the show directed and choreographed by Kay Cole. With 20 original songs, music director Phil Swann recorded tracks on Music Row in Nashville, lending them appropriate country music bona fides. After a successful run at The Crazy Horse Saloon in Santa Ana, CA, the show had a later short-run at Buck Owens’ Crystal Palace in Bakersfield, CA.

REVIEW BLURBS FROM The Geeze & Me, San Diego, CA

Charlene Baldridge, La Jolla Village News:“Helen [is played by] wondrous singer Lorraine Devon Wilke, whose ‘Myself ‘ is one of the show’s most effective numbers.”

Milo Shapiro, Stage and Cinema:
“Also touching is one woman’s interaction with a homeless woman in the poignant ‘Oh, Sister,’ sung by Lorraine Devon Wilke and Erin Vanderhyde.”

David Dixon, San Diego Story:
“Several of his more dramatic numbers are sung tenderly by Wilke, and her emotional singing on ‘If I Ever Smile Again’ touchingly fleshes out Helen.”

Sign up for LDW updates and newsletters.
Your address will always be kept private.